Africa and Cheap Electricity in a kiosk: powering mobile phones in Rwanda and beyond

Mobile communication has enhanced the way we send and receive messages. From the comfort of the home: calls, text messages, pictures and videos can be sent and received via mobile phones.

Mobile phones use electricity charged batteries as their power source. In places where electricity is not readily available using mobile phone for communication is limited.
For example, in Rwanda more than 70% of its population use mobile phones and only about 18% have access to constant electricity. 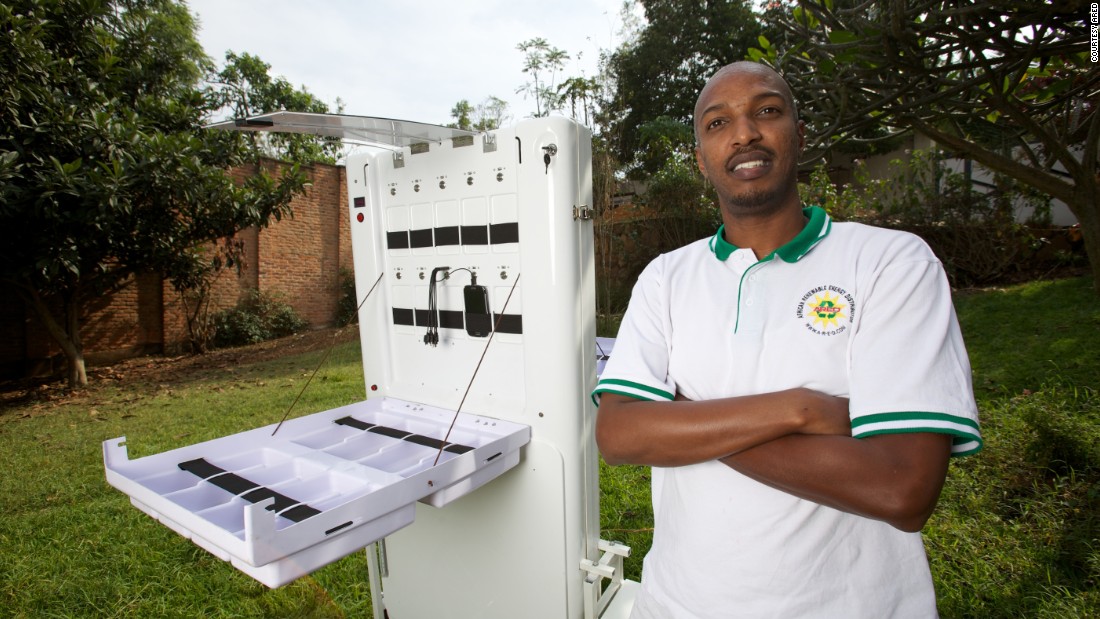 Henri with one of the solar powered electricity kiosk, Photocredit: www.cnn.com

However, a young business man came up with an ingenious solution to the power shortage problem.

It emerged in the form of an electricity kiosk: a solar powered machine that can be pushed around. It can charge more than 70 phones at once.

Behind this invention is the CEO, African Renewable Energy Distributor, Henri Nyakarundi. Henri was born to Rwandan refugee parents who were living in Burundi until civil war broke out. They were forced to move to the United States.

In the US, Henri attended Georgia state university. He graduated with a degree in computer science.

The solar powered kiosk’s idea came upon his return to Rwanda. In his native country, he discovered that although a lot of people had mobile phone electricity to power phones was grossly inadequate.

Henri who was already an entrepreneur. He had successfully setup few businesses in the United States. He wrestled with the problem until he had a solution. He came up with the solar powered charging kiosk.

Customers charging their phones at the kiosk. A receipt is issued to them so as to claim ownership of their phones, Photocredit: www.gsu.edu

His company began operating a franchise system that leases the kiosk to business agents creating employments in Rwanda in the process.

With $100 down payments and $200 second installment, agents are able to lease the kiosks from ARED. The agents in turn make about 30-100$ in a month.

However, for women or people with disabilities, leasing the kiosk is totally free. Sembemba is one of the kiosk agents suffering from a disability.

His initial job as a watch repair technician was not bringing much home. At one point, his child dropped from school.

As an agent for ARED, Sembemba has been able to return his child to school and can feed his family. He has big dreams – to own a house. 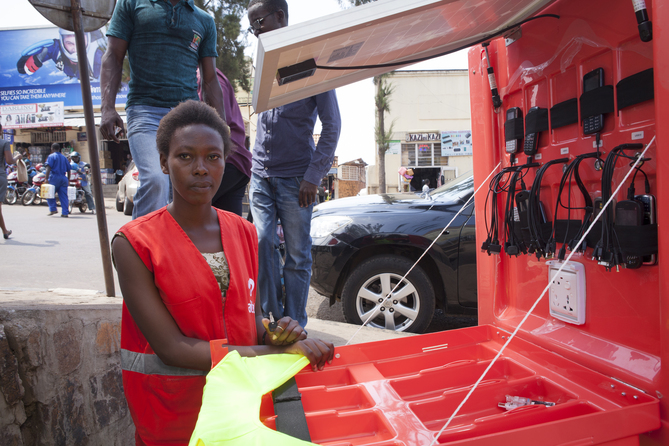 One kiosks agents at her station, Photocredit: www.one.orgs

Technology start-ups across Africa are taking shape. What seemed impossible in past decades have become a reality.
There is a generation that is taking the initiative and they are rewriting Africa’s history. Across the continent, a quiet technology movement is on the horizon.

In no distant future, some will dare to solve the broader  problem of nationwide electricity shortage.

Constant electricity is one way Africa’s economic potentials can be fully realized. Something has to give.

There has to be dedicated leaders, fine thinkers, and entrepreneurs out there who can develop a strategy to tackle countrywide electricity shortages.

They may have to confront run away corruption, government bureaucracy and limited resources but dare to make a difference. From Rwanda in east Africa to Nigeria in west Africa, this is one of the next story.