Africa’s Sleeping Giant: How Nigeria can snatch Victory from the Jaws of Defeat

Some economist define recession as a period when there is a drop in the stock market, increase in unemployment rate, decline in production capacity of an economy as well as shortage in public housing.

It is has been reported that there is at least 620,000 ounces of gold reserves at Ogun state, south west Nigeria. Photocredit: http://www.bullionstreet.com

Developing nations like Nigeria, where a significant percentage of the population are government employed and manufacturing capacity is growing, a sharp drop in government’s revenue consistent over two successive quarters of the year is termed recession.

It is no longer news that the economic value crude oil  commands in the global market has dropped significantly. From above $100 per barrel in late 2014, the price of the bonny light crude has dipped, hovering around $26-$28 per barrel between the months of July – November 2015 before settling at $45 per barrel in August 2016.

Nigeria’s government is unable to meet some of the basic routine responsibilities, having built an economy resting firmly on proceeds from crude oil.

The country’s finance minister in a recent meeting with the legislators gave a hint, indicating that the country was technically in recession. Government was increasingly finding it difficult to meet its obligations due to shortage of national sovereign fund.

Various media platforms as well as the social media went agog as different commentators traded words as to who should be blamed for the economic troubles. But truth be told economic recession is not a native of Nigeria. Lessons need be heeded. But we must quickly change course.

In 2008, bad investment policies arising from banks in the United States triggered a wave of economic storms. Top companies laid off staff in mass. European countries followed and stock markets in these countries fell sharply, in some cases overnight. Then Asian and African countries were also hit.

It was an international emergency only compared to the Great Depression of 1929. This was supposed to be high-trust countries that understood the times correctly. But in a moment of strange ambition and lack of self control, the push for quick unrealistic returns on investment pushed US and European countrymen to the very edge of darkness.

In 2008, the Great recession changed global trade as we know it for years to come, bringing about worldwide disregard for western banks and their monetary policies. 1929, the US Stock market lost more than 30 percent of its value in 3 days.

But in Africa, we are battling generational problems. This include very chronic economic storms fueled by a series of factors.

For more than hundred years, beginning from the 1800s to the 1990s, a period steeped in pain. Africa battled colonial rule. Then fought dictators. Then came corrupt politicians and bloody wars.

It then seemed that at the turn of the century, in 2000, things would improve dramatically. But old habits lingered. Some African countries dared to dream. Nigeria, Africa’s most populous country, joined the league of nations embracing democracy.

But democracy can be misleading. This is also true for many forms of man-made government including monarchy, communism, totalitarianism and the emerging secular system. They come with inherent flaws. Enduring commonwealth is not so much about democracy. Rather its people and the everyday choices they make.

To address Nigeria’s present needs, we look at some historic events and how some have tackled setbacks including economic recession.

Americans protesting on the streets of New York during the 2008 economic recession in america, photo credit: www.britannica.com

In 2008, when the United States underwent recession, an intervention package of about $800 billion was released. This package was meant to keep American jobs, care for vulnerable people most hit by the recession as well as provide infrastructure, including healthcare and education. It was meant to change US fortunes. This is like the paramedic who saves life before the patient is sent to hospital for further treatment.

But for Nigeria, it is a different set of challenges. A developing country with complex issues that confound some of the brightest minds.

Some economist suggests pumping money into Nigeria’s economy so as to cushion the harsh downward trend. This idea has some merit. Good timing will make a huge difference. But a prepared nation changes everything. Cash injection seems to work in the hands of creative, quick thinking and dedicated people.

Nigeria’s come back strategy will depend on everyday people and leaders who dare to dream. Good dreams. They will have endurance and stamina. Their courage will come with danger. They will devise a good rescue plan. For every dishonest policy there is a good counter strategy. For every selfish politician, there is a dedicated leader.

It was Winston Churchill at the height of the second World war who wrote one of the most inspiring sentences in English language: ‘ Never was so much owed by so many to so few.’ In other words, it teaches us that when combating national and global problems, few ready hands could be the difference between life and death. This is true for Nigeria’s enterprising people.

Economic recession can lead to great solutions when creative thinkers come together.

In the southern regions, a vast expanse of land and freshwater boasts some of the world’s largest deposits of natural gas, iron ore, coal and gold. In the northern regions, you have tin, gold, bitumen, iron ore and limestone.

It has been said that the production costs of mining gold in Nigeria could easily be as low as about $50 per ounce. There is no large scale gold mining operation in Nigeria today, though there is small-scale mining carried out by local tribesmen. With the decline of crude oil prices, foreign investors are looking to more traditional forms of revenue-generation.

Solid minerals  remains one of the leading channels for low skilled, massive employment in the world. It also has quick return on investment, sometimes in a matter of days and few months. Half a million jobs are traceable to South Africa’s mining sector.

It is major source of revenue for local government called county in the United States. Canada also.  They encourage intensive mining efforts during the right seasons. Winter months with lots of snow is considered off season. In Nigeria, all year round the seasons are good for mining. Australia is one of the leading producers of coal and iron ore, with hundreds of thousands of jobs every year. 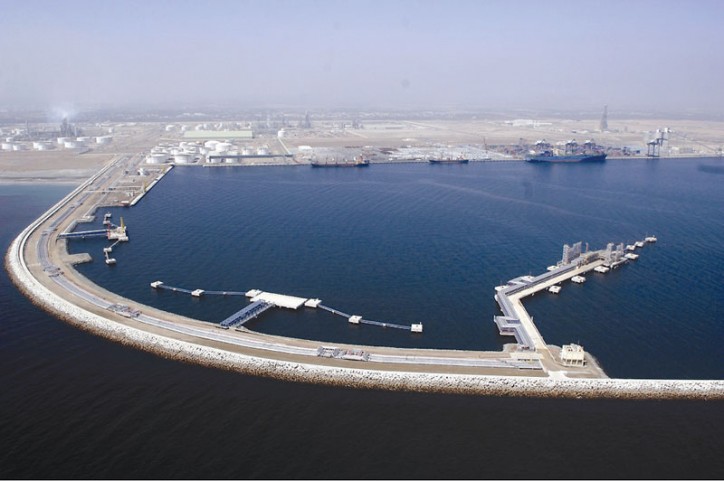 SOHAR seaport in Oman. This facility was developed to allow the biggest ship in the world to berth and load iron ore for export. can the River Niger become Africa’s hot spot for coal export? photo credit: www.vesselfinder.com

Imagine a mega mining operation in Nigeria’s northern and southern regions, this is where creative thinkers and leaders can bring in the best mining companies in the world. The goal is nothing short of making Nigeria the mining center of Africa. It just takes a quick thinking team of adaptive entrepreneurs to do this.

When you establish joint venture agreement between federal, state, local governments and Global mining powerhouses in 2016, it begins the first phase of quick infrastructural expansion, economic recovery and job creation.

Begin mining operation in earnest. The land is green.

Increase tax holidays for every 10,000 jobs added by companies. In some cases, eliminate taxes for the first 5 years, where Nigeria’s government gets higher royalty payments for minerals excavated. This should be contained in the joint venture agreement.

Then with sudden injection of billions of dollars, the timing is right. Funds in the right development projects.

Ogun state have large gold deposits. Coal in vast quantity in Enugu state. Tin in Plataeau state. You are looking at thousands of jobs in the next few months. But that is is just beginning.

Then cap it with home-grown mining companies that understudy the big players. They will become the next generation of mining powerhouses in Africa and beyond.

If you’ve got a story that you think Amazingvillage should spotlight, tweet us using the hashtag #amazing_village or email @ theamazingvillage@gmail.com